We arrived in Munich early in the morning.  The bus ride to the hotel took us on the Autobahn, including over stretches where there is no speed limit.  On the way, Dr. Hayse gave us an introduction to Munich, the capital of the German state of Bavaria, and also its largest city.  Munich is perhaps most famous for its annual Octoberfest, but it also was the place where the Nazi Party was born, and, where, under Hitler’s leadership, the Nazis first tried to seize power. 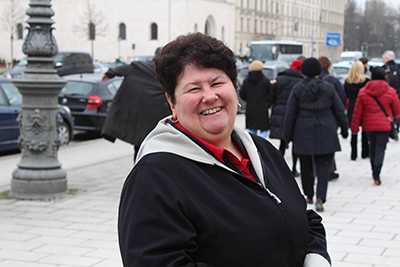 After checking into our hotel, we met in the lobby for a walk along Arnulfstrasse for lunch at the central train station of Munich.   We then had an opportunity for a short rest back in our rooms. 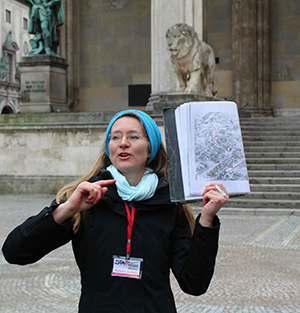 Later in the afternoon, Jessica Kramer, our Munich tour guide, showed us a bit of the city.  We boarded the tram to Stachus Square, and passed through Karlstor (Karl’s Gate) to the old city of Munich.   We stopped at a memorial for the main synagogue of Munich, torn down in the summer of 1938, months before the events of Kristalllnacht.  Marcia Fiedler and Izzy Posner translated the Hebrew inscriptions for us.  We also visited the Buergersaalkirche, which houses the tomb of Father  Rupert Meyer SJ, a Roman Catholic priest who served in the German army during WWI, won the Iron Cross, First Class, and beginning in the 1920s,  preached against the Nazi state. Meyer was arrested by the Gestapo, landed in prison and concentration camps in the 1930s and 40s. He survived imprisonment and the war, returned to Munich, began again to preach and serve the people in his parish, but had a stroke and died about six months after the end of WW II.  Bavaria was, and remains, a very Catholic state.  Moving on to Marienplatz, we had an opportunity to view the various historical landmarks such as the town hall and the Bavarian clock tower.
(written by Peggy Fiore) 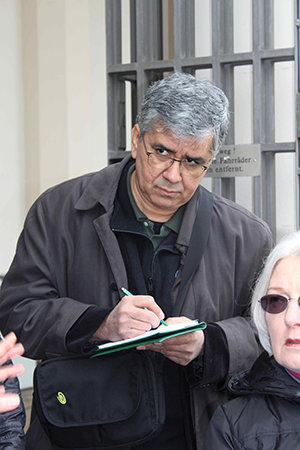 The Germany/Netherlands Study Tour enjoyed its first meal as a group at the Ratskeller Restaurant in the heart of historic Munich.  Located in the cellars below the new town hall (constructed in the 19th century), the restaurant has the look and feel of a cathedral, with its stained glass windows and vaulted (or arched) ceilings.  We enjoyed an array of traditional German foods (a variety of sausages, delicious rye bread, pretzels, and good Bavarian beer).  Before dinner President Saatkamp expressed the group's gratitude to the tour's organizers, Michael Hayse, Gail Rosenthal, and Carol Rittner who also delivered a heartfelt welcome to the tour participants.
(written by Michael Rodriguez) 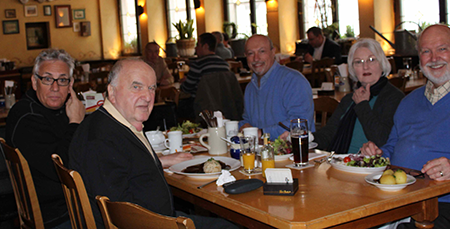 Munich was established in the 12th Century.  Salt trading first brought people to this part of Germany.  But a dispute over a bridge by a Duke and a Bishop is what started Munich’s rich history. By 1158 the dispute was settled by the Holy Roman Emperor Barbararosa (sp?) and the name ‘Munich’ was officially established.  From the 12th century to now, Munich has seen The Holy Roman Empire, The Reformation, The Counter  Reformation, the German Reunification of 1871, the birthplace of NS, the American Occupation post WWII – and so much more.  One life is simply not enough to discover all it has to offer.
Even though 80% of Munich was destroyed in WWII, modern day Munich exhibits an atmosphere of old and new. After walking through a replica of the old city gates, pedestrians can sample modern day clothing and jewelry stores that do not disrupt the style and feel of Gothic and Renaissance churches. While the architecture is respectful and, in some cases, abides by the old city walls, the citizens of this great city appear to have a reverence for their home city.  Furthermore, the zxa reverence for their home city.  Furthermore, the Church of Our Lady, a cultural monument in Munich, has two steeples at 100 meters high.  Only a few buildings were built above this height thus avoiding a city with overpowering skyscrapers.
In addition to history preserved and modern day industry, Munich appears to be a hub of cultural diversity.  I heard a variety of languages and observed people that did not appear to be German.   I don’t know whether they are people who are temporarily passing through or have resettled but having an international flavor is something that will make Munich stronger than the sum of its parts.  Munich is a very special place that deserves to be relevant in the 21st century.
P.S. All of the historical and cultural information was provided by our amazing tour guides, Jessica and Natalie.
(Written by MICHAEL A. MORRIS)