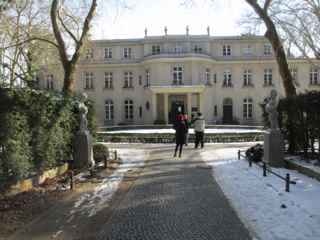 The House of the Wannsee Conference
We began our day with a visit to the House of the Wannsee Conference. In this house – a former industrialist’s villa built in 1915 and used from 1941 to 1945 by the Nazi SS as a conference center and guest house, is a stately villa just outside the city of Berlin. It was here that fifteen (15) high-ranking representatives of the SS, the Nazi party and various Nazi government departments met to discuss their cooperation in the deportation and murder of the Jews of Europe and occupied North Africa (Morocco, Algeria and Tunisia).
As Dr. Christoph Kreutzmüller from Humbolt University, our guide, explained, the meeting – in effect, a “business meeting” – was held on 20 January 1942 at Wannsee villa, organized by Reinhard Heydrich, Head of the Reich Security Main Office – the RSHA. This meeting was not about whether or not to kill the Jews but about how to kill them. It was, to say the least, sobering for me to sit in the same “space,” breathe remains of the same air, look at and touch the same ornate marble fire place those bureaucrats of murder sat in, looked at, and breathed in and out. 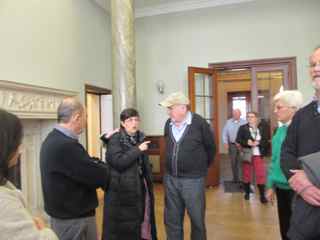 Christoph told us that by the time the Wannsee Conference was held – it was a two-hour meeting followed by breakfast – already 1,000,000 Jews in German-occupied Europe were dead. This was a meeting to deal with the remaining Jews in occupied territories, and in countries the Germans intended to conquer and occupy. However, Heydrich couldn’t do it alone. He needed help, and these men (!) were invited to lend their support and expertise to help Heydrich accomplish his murderous task. Infamous Adolf Eichmann, for example, was a transportation expert: he organized railroad timetables so that the Jews of Europe could be efficiently moved from all over occupied Europe and North Africa to killing locations in the very heart of so-called Christian Europe.
There were fifteen (15) copies of the Wannsee Protocol (meeting minutes) prepared. Fourteen (14) of these copies were destroyed by the Nazi bureaucrats themselves, so as not to leave incriminating evidence as the war ended, with Nazi Germany defeated. But, one (1) copy was discovered after the war in captured Nazi German Foreign Ministry files and that was Martin Luther’s (what an ironic name!) copy. Luther had been arrested and put into a concentration camp by his former Nazi colleagues for conspiring against the Foreign Ministry, I think. As Christoph said, Luther did not have time to destroy his copy of incriminating evidence. It is because of this one extant set of minutes from that murderous meeting that today we have this document that so clearly outlines the plan to murder all the Jews of Europe (and North Africa) and that we also have evidence of the active participation of Germany’s public administration in the Nazi genocide of the Jews. 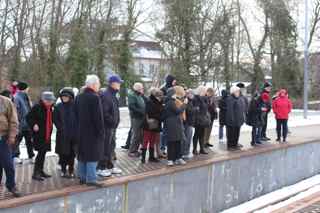 Asked if any of these men who planned how to murder the Jews were ever brought to justice after the war, Christoph told us that one was assassinated (Heydrich); two committed suicide; one (Martin Luther) was sent by the Nazis to the concentration camp Sachsenhausen; several were captured, brought to trial and served prison terms, but were released after only a few years; one disappeared without a trace; one escaped to Argentina after the war, was captured by the Israeli Mossad in the 1960s, tried in Israel, and hung for his crimes (Eichmann); and two (2) were never brought to justice.
Christoph also spoke to us about the importance of being able to really “see” what is in a photograph – there are so many photos taken by the Nazis of their victims. He did this by explicating four (4) different photographs in the exhibition housed in the Wannsee villa.
From Wannsee, we went by bus to the site of The Track 17 memorial at Grunewald railway station. The German railroad (Deutsche Bahn AG) erected a central memorial in Berlin to commemorate the deportation of Jewish citizens with the cooperation of the railroad (they made a lot of money cooperating with Nazi Germany during the Nazi era). The memorial is extremely moving, consisting of a large wall scripture that shows (in an impressionistic style) figures of people disappearing into the distance, as well as a steel (or some sort of metal) ground covering – like a grate – over the former railroad platform (where passengers could stand to wait for a train). On this grate, edging the platform on both sides of the passenger standing area are the dates of every train that left with Jews (and perhaps others too) for Theresienstadt, Auschwitz, and other destinations of death in the east from 1941 up until almost the end of the war. At the Track 17 memorial we had a memorial prayer service for all the victims of the Nazis, 6 million Jews and 5 million others.

Leaving the House of the Wannsee Conference, we enjoyed a bag lunch on the bus while driving through very nice neighborhoods of Charlottenburg district to the memorials at “Track 17” (Gleis 17).  This was a quiet freight rail station where thousands of Jews – fathers, mothers, children, grandparents, cousins and friends were put on trains bound for Auschwitz, Theresienstadt, Riga, and other killing sites.  Dr. Kreutzmüller again urged us to view the numbers on the platform memorial not as statistics but as individuals.  A moving reading and candle lighting ceremony at the memorial plaque was a profound experience.
Upon returning to city center Berlin, we each selected one or two places of interest to visit, each led by a different tour leader.  The options included the Topography of Terror exhibit, the Bendlerblock memorial and museum to the German resistance, the Berlin Wall Museum, and/or art museums such as the New National Gallery, the Gemäldegalerie, and the Old National Gallery.
We joined the group that visited the Topography of Terror, with Dr. Christoph Kreutzmüller serving as our guide.  He invited us to “see” some of the photographs rather than looking at them as historical “data.”    One example he used was a photo of people coming from their daily activities to watch the SS march ordinary-looking businessmen down the street to board the deportation trains, forbidding them from wearing their hats as a form of humiliation.  “These watchers were many, some took photos,” Christoph explained.  “Our conclusion is that they became perpetrators at that point.”  Another question he asked was, “How many German soldiers are taking photos of the people who had been hanged to death a few minutes before?”  The picture showed that there were at least eight such soldiers.
We also learned that the Topography of Terror is on the site where the SS and Gestapo headquarters had been located before they were damaged in the war and later torn down altogether.  In the 1980s, basements were found below ground, some of which are still left for us to see along the block-long piece of the Berlin Wall that had been built over the site.
As we left, Christoph showed us where the Jewish garment district had been, memorialized by three large mirrors and engraved tablets.   He insisted that we have the experience of riding the underground for two stations back to the hotel.
Our group has really bonded, becoming brothers and sisters in a life-altering experience.
(written by Dot Saatkamp)