In the morning, we had a guided tour of the historic Amsterdam Jewish Quarter, including the Jewish Historical Museum and the Portuguese Synagogue.

The museum was closed to the public that day so we were grateful once again to be granted special access.  We learned that Sepharidic Jews from Spain and Portugal were attracted to the more tolerant Amsterdam during the 15th and 16th centuries, where they found refuge from the Spanish Inquisition.  In the Netherlands, they were welcomed for their skills in language and trade.


The Jewish Historical Museum is comprised of four carefully restored synagogues in the heart of Amsterdam’s former Jewish Quarter.  The permanent exhibit illustrates the story of how the Jews lived and practiced their religion among the non-Jewish population of the Netherlands.   Especially interesting was our guide’s description of the differences between Ashkenazi and Sephardic Jews, explaining that the Sephardic Jews who came from Spain and Portugal mostly called themselves ‘Portugese Jews’ to avoid references to Spain.  Also, it was not considered proper for Sephardic Jews to marry the Ashkenazi Jews. 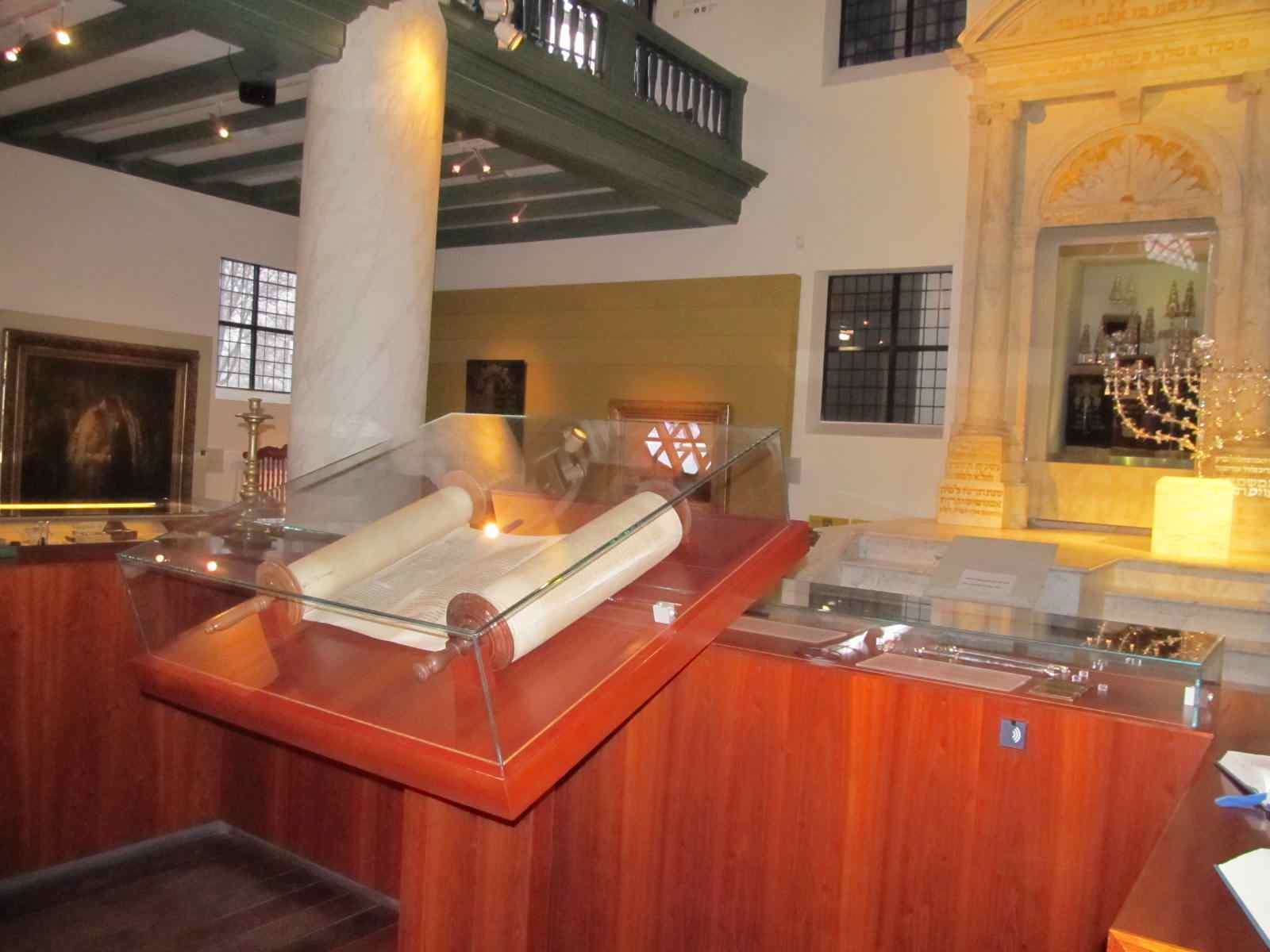 Another highlight of the Jewish Historical Museum was the JHM Children’s Museum.  In the various rooms, one can learn about the Hollander Famiy’s observance of Jewish religious ceremonies and traditions.  I was especially attracted to the mural, Sgt. Kosher’s Jewish Hearts Club Band, a composite of famous Jews including historical figures such as Moses and Jesus Christ; modern historical figures such as Sigmund Freud, Golda Meir, Albert Einstein, and David Ben-Gurion; alongside contemporary pop culture figures such as Barbra Streisand, Bob Dylan, Gene Simmons and Marilyn Monroe.  Enchanted, I purchased four copies in a poster size to give to my family members as a souvenir of our extraordinary tour.
(written by Peg Fiore) 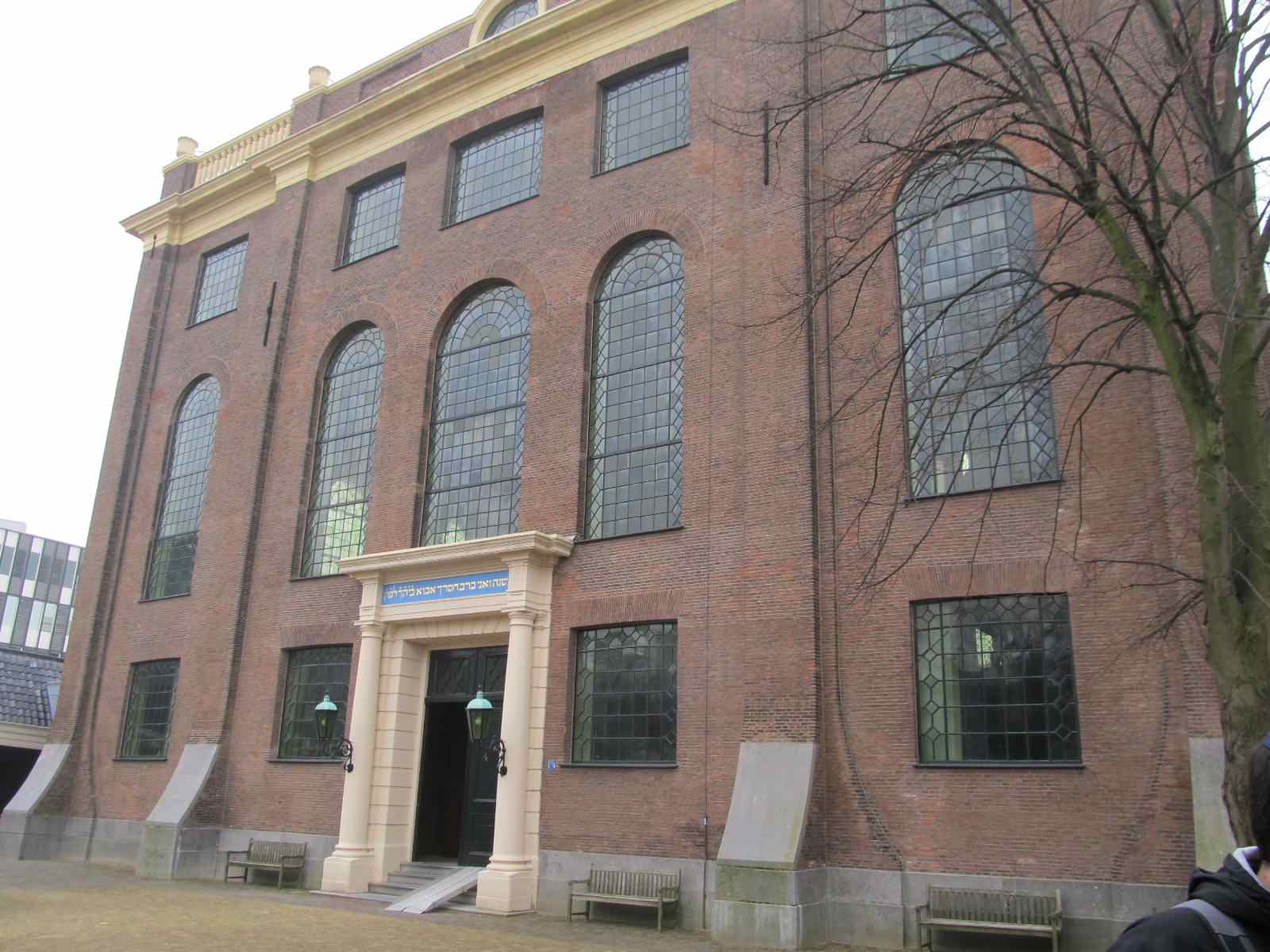 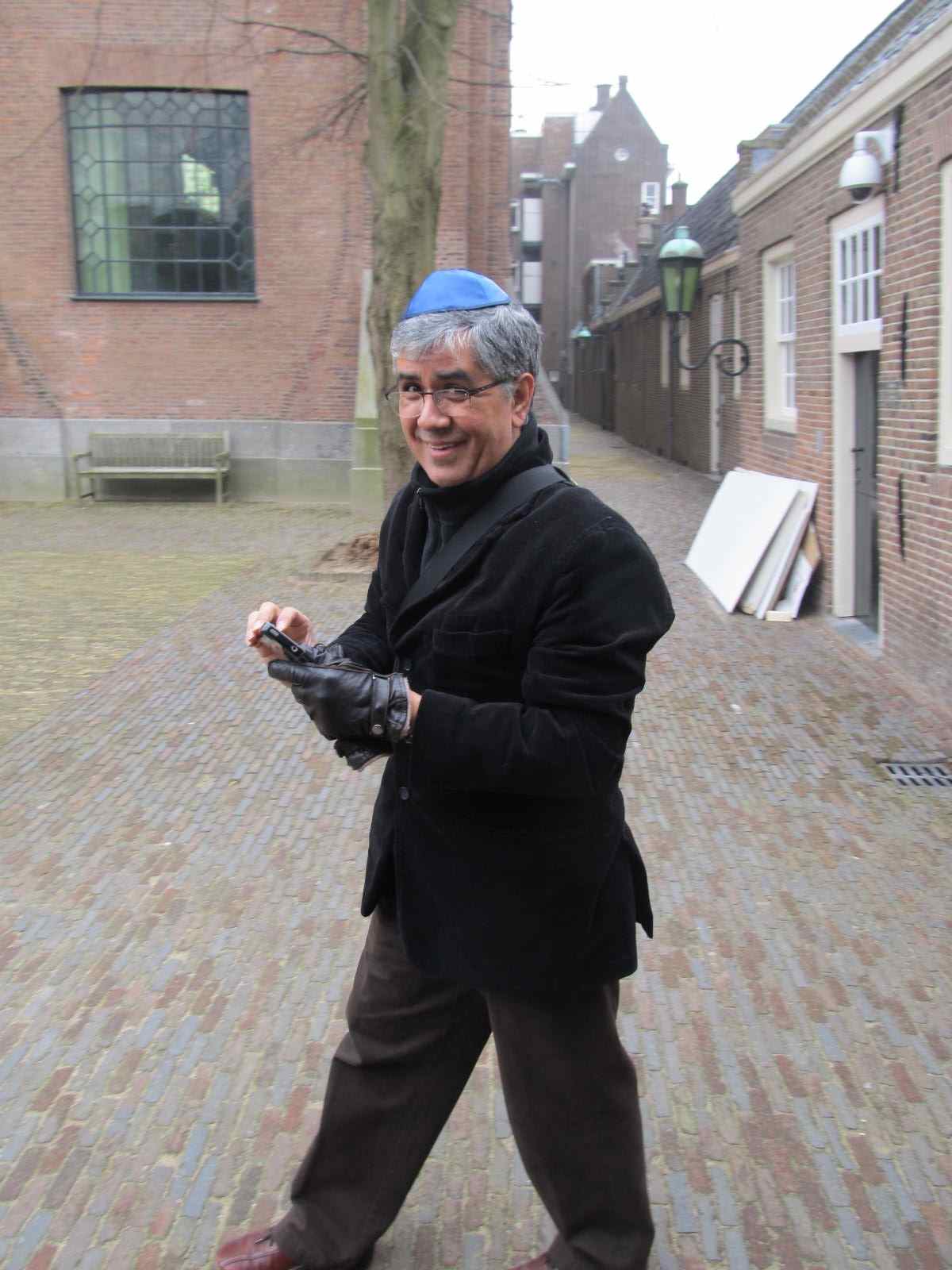 In 1639 three small Sephardic congregations joined together to form the current congregation.  In 1670, a decision was made to build a large new synagogue and the design of Elias Bourman was chosen.   His classical design was based on the historical proportions of the Temple of Jerusalem, with a central synagogue surrounded by a complex of lower buildings and a courtyard where children can play in safety. 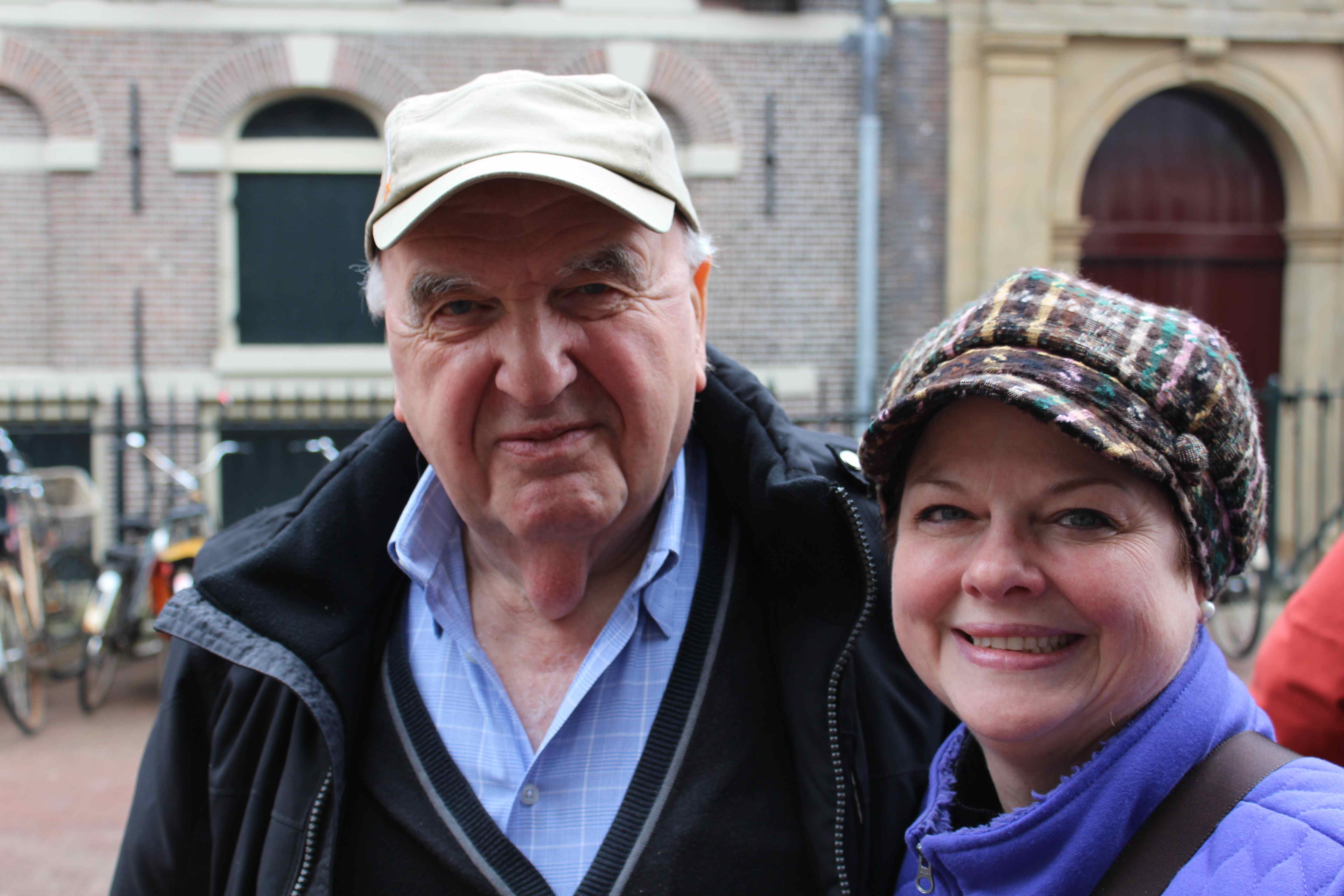 During World War II, the Nazis intended to use the structure as a collection and deportation center for Jews, but due to the many windows of the building, it was deemed inappropriate.  There was both concern that it would be especially vulnerable to destruction by Allied bombing and that anyone could easily see what was happening inside the building.
(written by Peg Fiore) 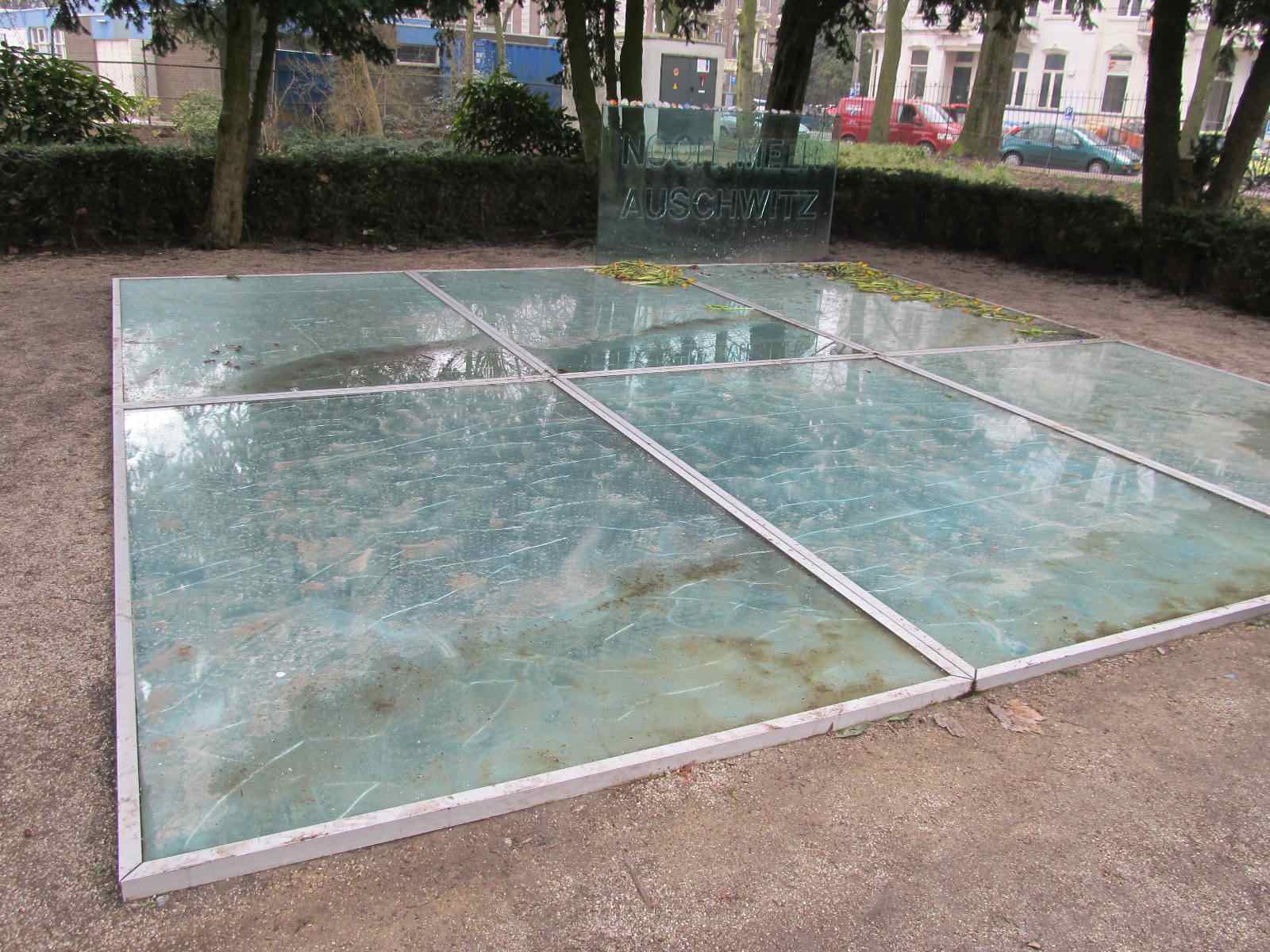 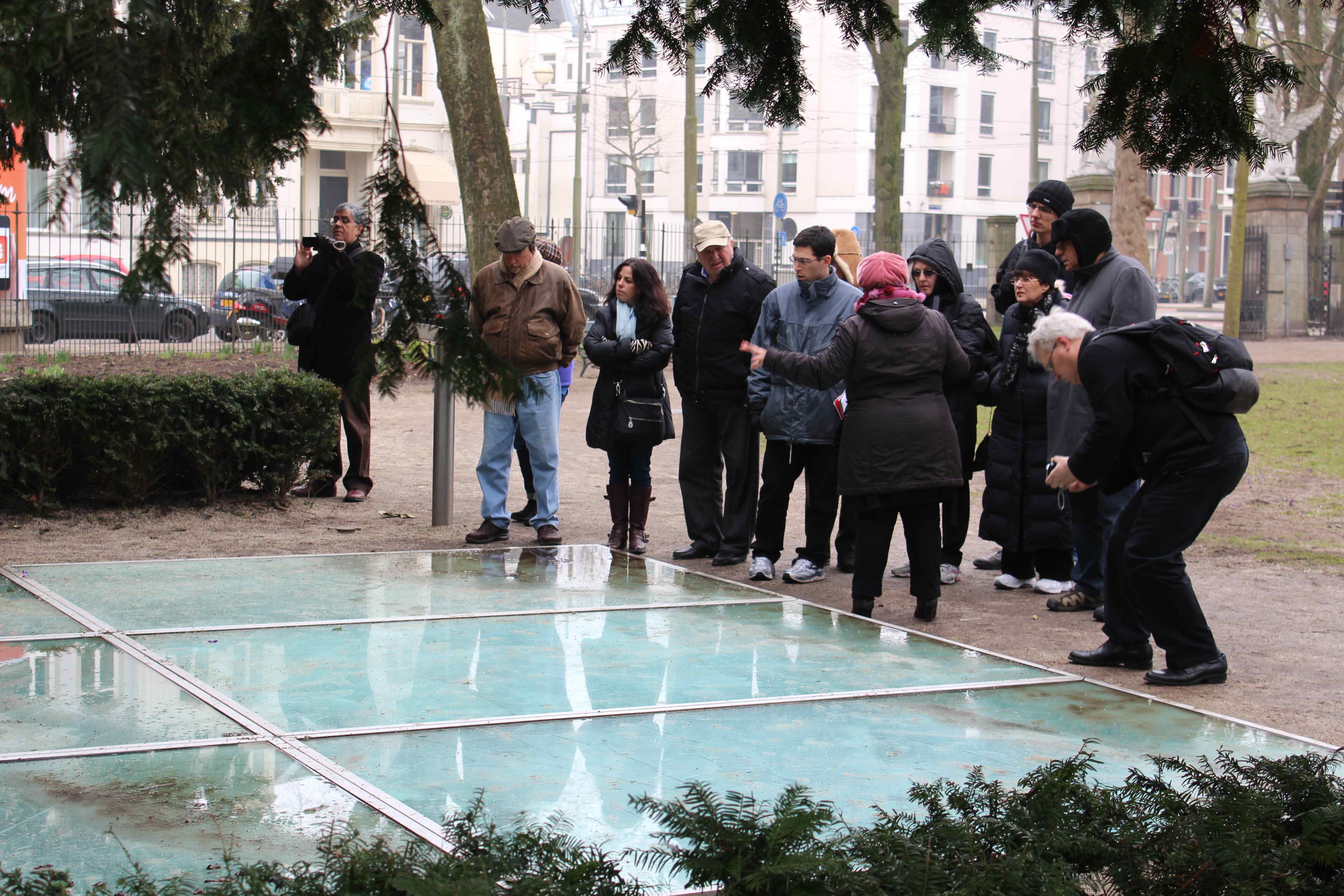 It consists of six broken mirror panels – suggesting the six million Jews killed in the Holocaust – that reflect the sky, in front of a glass and mirror panel that reads “Never Again Auschwitz” or “No More Auschwitz” in Dutch.  The symbolism is clarified by a statement made by the artist:  “The sky is wounded forever. Auschwitz was an unspeakably appalling attack upon everything that humanity stands for.”
(written by Michael Hayse). 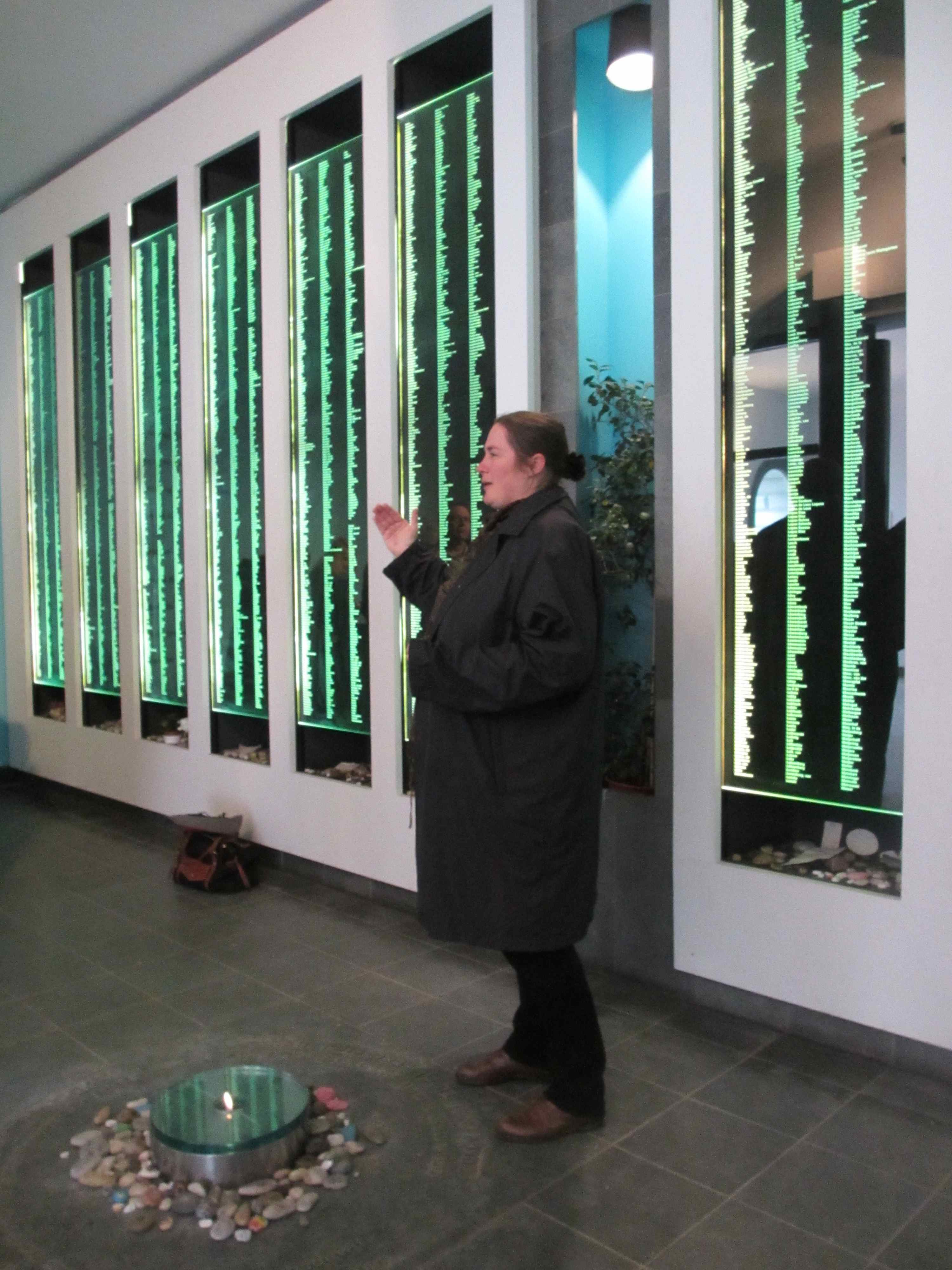 Hollandsche Shouwburg
Our final stop of the guided tour on this, our final day of the study tour, was at the Schouwburg (Theater), a public theater that the Nazis called the “Jewish Theater” when they occupied the city.  Later, Jews had to report to authorities in the Schouwburg for deportation, most of them forcibly escorted.


After the war, the Schouwburg was designated as one of the earliest Holocaust memorial sites (1962).  One of the most moving aspects of the memorial was an installation from the 1990s with an eternal flame and the surnames of victims deported from the Netherlands. 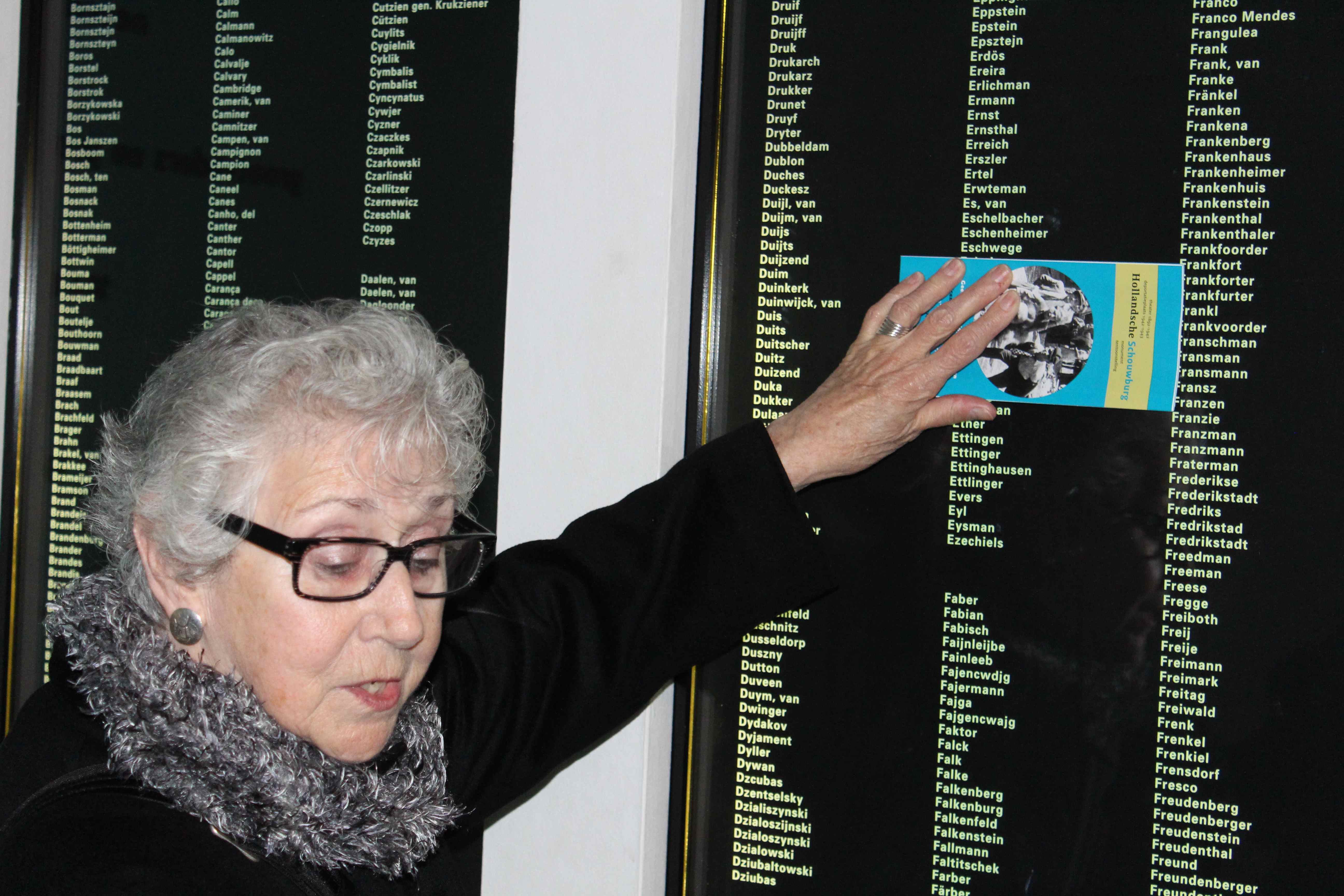 Maud Dahme showed us where her family name (her maiden name is Eschwege) was listed and told us how important this memorial was to her personally.  Fred Spiegel’s family name was also there, as were other surnames from study tour members (not all of them referring to direct family relations). 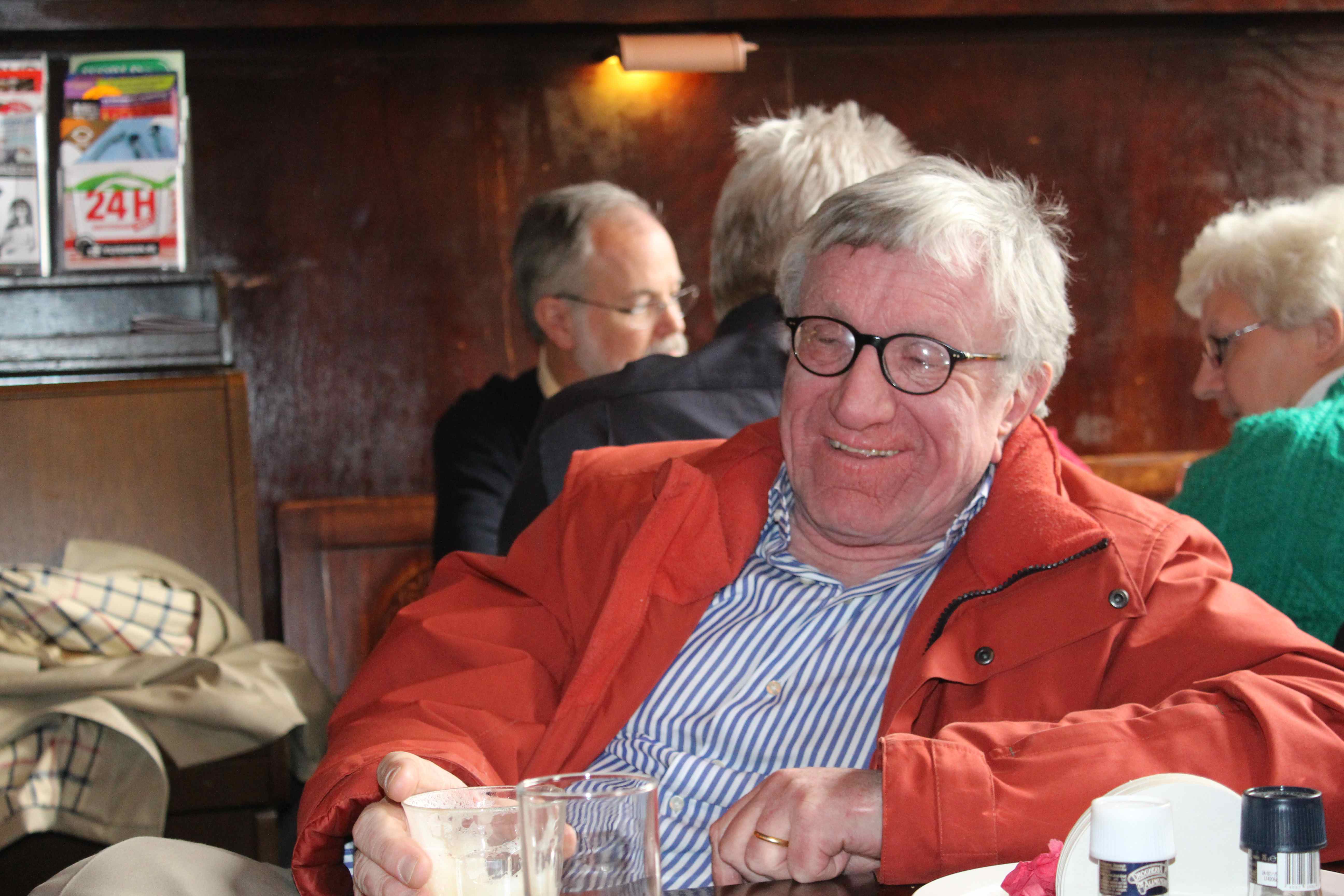 After a relaxed lunch in the warm atmosphere of Café Eik en Linde, we had the afternoon free.  Some went with Maud and her good friend, Marja, on a walking tour of the city; others visited the Hermitage Museum, a branch of the original in St. Petersburg, Russia that has a special exhibit of paintings by van Gogh while the von Gogh Museum undergoes renevations; still others went to the Museum of Dutch Resistance.

Thus, a tour that has been emotionally and physically quite demanding ended with a memorable, near magic evening that underpinned, once again, the College's strong emphasis on Holocaust education, as well as its insistence that such education be relevant for today as we still live in an age wherein genocide continues.
(written by Jan Colijn)