DAY THREE – Wednesday, March 13, 2013
Nuremberg, Germany
Nuremberg is located in the region of Lower Franconia in Bavaria. Although 95% of the city was leveled in World War II, the “old city” of Nuremberg has maintained a distinct character. When you walk around, it feels and looks like a medieval city, with portions of the original walls of the city still to be seen. Other parts of the old city have been rebuilt so as to recreate the medieval “feel”..
During WW II, the population of Nuremberg survived frequent bombings by the allies by hiding in a labyrinth of cavernous tunnels and vaulted halls beneath the city. These were originally built to store large quantities of beer in barrels. I should mention that there are many wonderful beer gardens in Nuremberg!
During the Holy Roman Empire Nuremberg was an important city, and we were told that during the Nazi Third Reich, it was an equally important city. Between 1927 and 1938, the Nazis used the city as the location for NSDAP rallies, annually beginning in 1933.
We stopped at the Palace of Justice in Nuremberg where we hoped to catch a glimpse of Court Room 600, the site of the Nuremberg War Crimes Trials.
We toured the “Memorium Nuremberg Trials” exhibit, which opened in 2010.  It provided a comprehensive summary of the trials of Nazi war criminals. These trials began almost immediately after the end of the war, with the main international tribunal beginning in November 1945.
At the conclusion of our tour of the exhibition, we learned that we would be able to get a look at Court Room 600, which actually was in session for a current trial. We were able to use “viewing windows” in a gallery area to see the courtroom.  Although Court Room 600 has been renovated since the war crimes trials, it was amazing to look down into the trial area and imagine the historical war crimes trials of the Nazis. 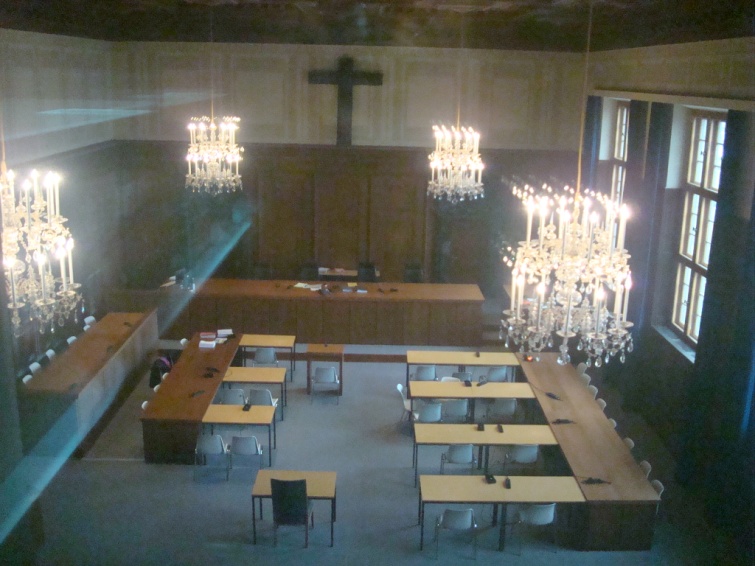 A large, plain crucifix is displayed on the wall above the judge.  This is allowed in Bavaria, which has a majority Catholic population.
Following lunch we drove through part of the new city of Nuremberg as we made out way to the Kongresshalle (Congress Hall), an unfinished structure intended by Hitler and the Nazis to be a gargantuan replica of the coliseum in Rome. Nuremberg was to be a venue for the Nazi Party and its annual stage-managed propaganda shows.  Construction on the structure began in 1933 but was suspended in 1939 when Germany invaded Poland and WW II began.

The ruins are crumbling and there is no money available from local, state, or national governments to preserve or restore this deteriorating site. Nor is there any outside group willing to invest in these old Nazi symbols of power.  The question for Germany – for all of us – is whether or not we should preserve ruins such as these. 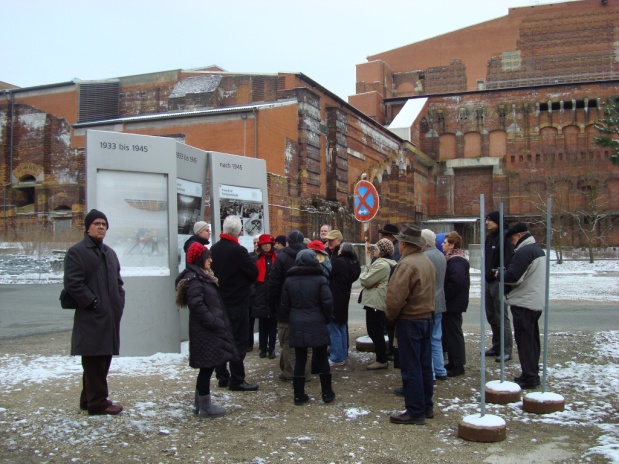 Left – the group at the Kongresshalle.

Right – an aerial photo of the unfinished structure as it looks today.
In recent years the structure has been used to store impounded cars, as a storage area for Christmas decorations, and for other storage purposes.  In 2001 a “documentation center” was built into the Congress Hall like a modern architectural “spear” stabbing through the structure.

In the shadows of the buildings sit large concrete slabs that are the original materials intended to pave a long wide road into the central area of the rally grounds.

Our last stop of the day was a tour of the Zeppelinfield,, a central component of the former Nazi party rally grounds.  We were granted rare access to the “Golden Room,” an inner chamber of the grandstand, modeled after the Pergamon Alter. 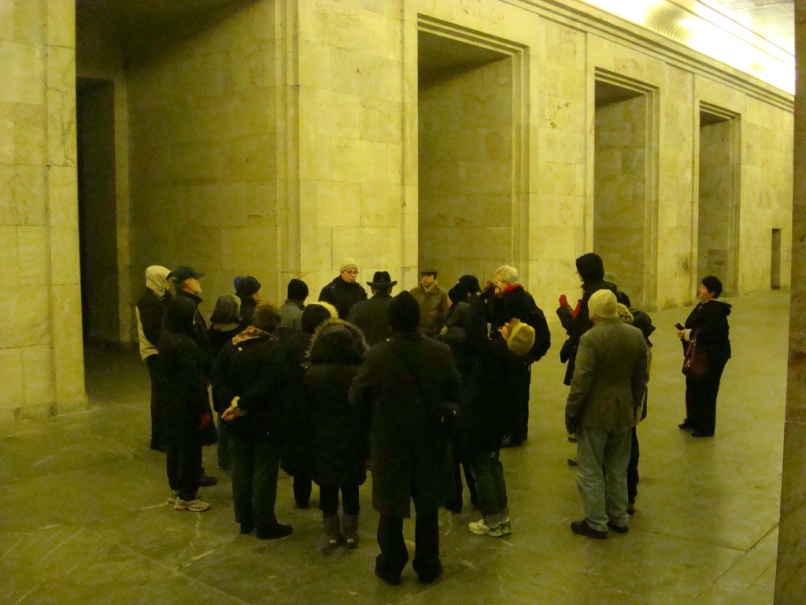 Right -Inner chamber of the Grandstand. 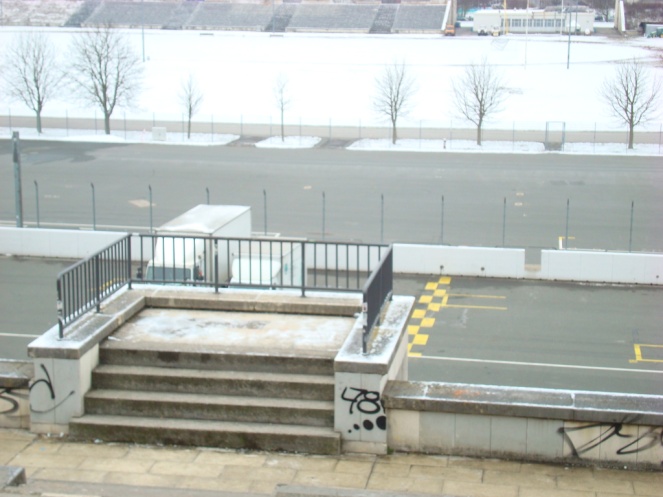 Left, the platform where Hilter stood to review the Parade Grounds.
We then boarded our bus to continue our journey to Weimar.
In the bus a lively discussion continued about whether or not these Nazi Party symbols of power and grandeur should, or should not be preserved.
(written by Peg Fiore)